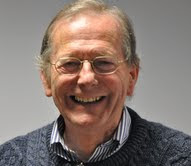 Patrick didn’t start writing until his mid forties. A Church of Ireland rector, he wrote a short story which was published in Ireland’s Own. Since then he has written poetry, and two memoirs. Having served in Laois, West Wicklow, and as staff of a theological college, he ended his career at a parish in the centre of Dublin. His main work there, was in Mountjoy, and in Hospital Chaplaincy. Patrick has now retired.

Who is Patrick Semple?

The Day Job: Retired. I write and fill the dishwasher. And I teach creative writing in Maynooth.

Interests: History. And I’m passionate about cricket. I watch it, and Rugby on television.

Next Book: Curious Cargo. This describes various cargo voyages Hilary and I went on.

Top Writing Tip: Don’t worry what people will think of it. Keep writing.

Based in the mid 1970’s this novel shows the struggles of an Irish country rector, as he goes about his duties, whilst having serious doubts about his faith. Meanwhile, his wife spends more and more time in the local pub. How can he convince her to admit she has a drink problem and go for help?

“I wrote it because I had a vast experience of the Rural church of Ireland, and of alcoholism, which I encountered in parishes. I got some insights into what it was about. The two themes are of alcoholism, and of belief and doubt. I went through huge doubt myself, and am now an atheist.”

The Verdict: An interesting and enlightening account of life as a Church of Ireland Rector.

For all my new Articles, Ghostwriting news etc, visit my wonderful new website.

Sue Leonard.
I'm a full time ghost writer and feature writer covering a huge variety of subjects. I'm mad about books. So the 'job' of interviewing authors and reviewing books isn't too much of a slog.I write the weekly Beginner's Pluck column in the Irish Examiner. I also write Health, Parenting, and General Features for The Irish Independent and The Irish Examiner; Book Reviews for the Examiner and Books Ireland; Teen features for 'Face Up' magazine, and Faith profiles for 'Reality.' I've ghost written four books; the latest, An Act of Love, co-written with Marie Fleming was a number one best seller. the first, My Life in THeir Hands, by Susan Kerwin with Sue Leonard, is on holds, waiting for Susan to settle a legal case. Another reached number two, and was in the bestseller top five for seven weeks. I also do some guest lecturing, teaching, and public interviews. My book, Keys to the Cage, was published by New Island in 2010.